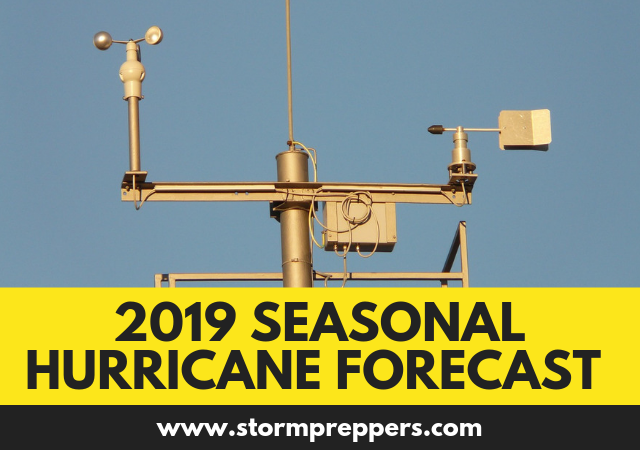 The hurricane research team at Colorado State University has released its initial hurricane forecast for 2019. The outlook states that the 2019 season will be slightly below normal activity. This is due to a weak El Nino. The forecast touches on several important points. But the most important one to note, especially for coastal residents, is that it only takes one tropical storm or hurricane landfall to make the season active.

Although, residents living in the general Atlantic tropical storm belt should always be prepared well in advance of the annual hurricane season, forecasting offers a more accurate outlook of things to come. These forecasts are important because they provide bases on which plans can be made for the hurricane season. National disaster and emergency management agencies benefit from in several ways. They use this information to formulate disaster relief efforts and mobilize disaster relief teams and resources.

Colorado State University has been providing forecasts of the Atlantic Tropical Storm season for thirty-six years. The seasonal forecasts provided by CSU were developed by the late Dr. William Gray. He was a leading author and researcher in topics related to weather and hurricanes. Along with his guidance and tutelage, several former students have made valuable contributions to hurricane forecasting. Hurricane forecasting is a relatively difficult science that uses satellite data to analyse weather systems.

The 2019 seasonal hurricane forecast provides an outlook that there will be 13 named tropical storms and 5 hurricanes. Two hurricanes are expected to be major hurricanes with a Category 3 rating or higher. The developing El Nino conditions will have an impact on the Atlantic hurricane season. This may be the underlying reason for a “slightly below average” hurricane season. Weather scientists are always researching El Nino and La Nina and their impact on hurricanes.

Additionally, the forecast also looks at the landfall probabilities of named storms impacting countries in the Caribbean and the Americas. This is an important aspect of the research by CSU and its partners. The probability of an impact in the United States is 95%; an impact in the Gulf Coast is a probability of 80%; a 77% chance that Florida and the East Coast will be impacted; and a 94% chance that a named storm will hit the Caribbean.

As a result of the dynamics of weather and weather forecasting, the CSU will be issuing updates to its seasonal hurricane forecast for 2019. 01 June, 02 July and 06 August are the dates for the updates. Further, in November 2019, discussions and analyses of these forecasts will be issued.

To read the report in full, please visit the Colorado State University’s website.